Pakistan contains treasures of ancient history, one of these is ancient metropolis of Taxila. The Gandhara Civilization was dominant here & Buddhism was its official religion. 3000 years old archaeological sites, stupas & artifacts have been discovered in this region. Taxila is a vast serial site that includes a Mesolithic cave and the archaeological remains of four early settlement sites including Saraikala, Bhir, Sirkap, and Sirsukh reflecting evolution of urban settlement. Bihr is also associated with Alexander the Great’s entry into Taxila in 326 BC.

Pakistan contains treasures of ancient history, one of the prominent of these being the ancient metropolis of Taxila. The Gandhara Civilization was dominant here & Buddhism was its official religion. 3000 years old archaeological sites, stupas & artifacts have been discovered in this region.  Gandhara (means “Land of the Lakes”) was a region comprised of Peshawar, Mardan, Malakand, Swat, Dir, Bajaur & Taxila in Pakistan & up to Jalalabad in Afghanistan. Situated strategically on a branch of the Silk Road that linked China to the West, Taxila reached its apogee between the 1st and 5th centuries. Taxila is a vast serial site that includes a Mesolithic cave and the archaeological remains of four early settlement sites including Saraikala, Bhir, Sirkap, and Sirsukh reflecting evolution of urban settlement. The Bhir mound was founded in the 6th century BC by the Achaemenians. Its stone walls and winding streets represent the earliest forms of urbanization. Bihr is also associated with Alexander the Great’s entry into Taxila in 326 BC. Sirkap was a fortified city founded during the mid-2nd century BC includes many stupas, and temples laid out on grid pattern. The city of Sirsukh with irregular rectangle of walls with rounded bastions reflect the early influence of Central Asian architectural.

Other important sites are Khanpur cave, the Dharmarajika complex and stupa, the Khader Mohra, and Kalawan grouping, the Giri monasteries, the Kunala stupa and monastery. The Jandial complex, the Lalchack and the Badalpur stupa remains and monasteries, the Mohra Moradu monastic remains, the Pipplian and the Jaulian remains, and the Bahalar stupa and remains. The Giri complex also includes the remains of a three-domed Muslim Mosque and ziarat (tomb) of the medieval period.

" The cradle of Buddhist Civilization," 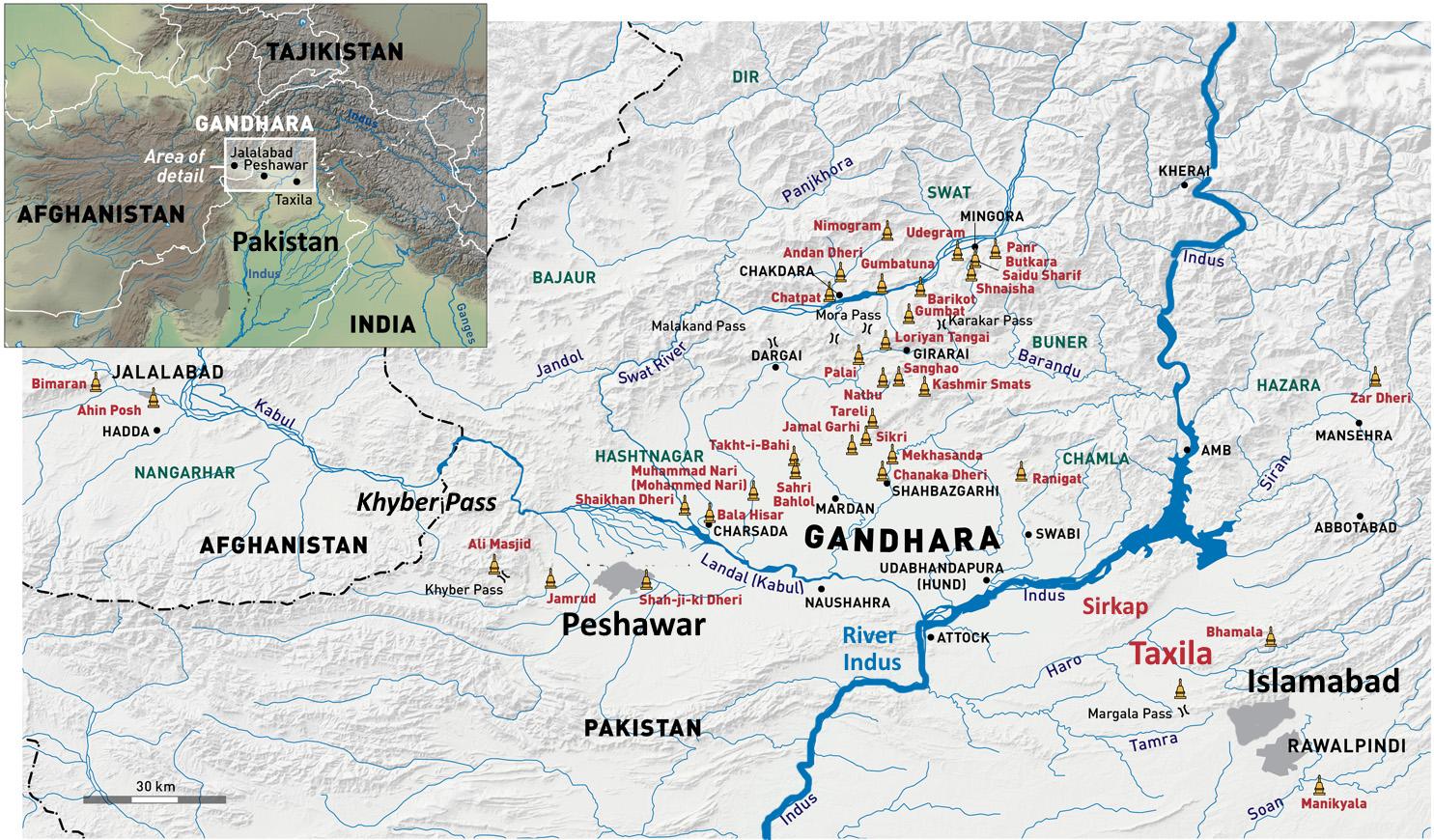 The map shows the core region of Gandhara extending from Jalalabad to the West towards Taxila in the East, with Peshawar at its center and Swat in the North. Map by  Muhammad Bin Naveed, 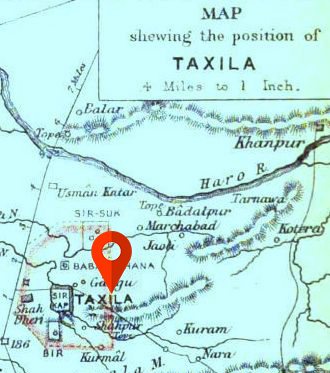 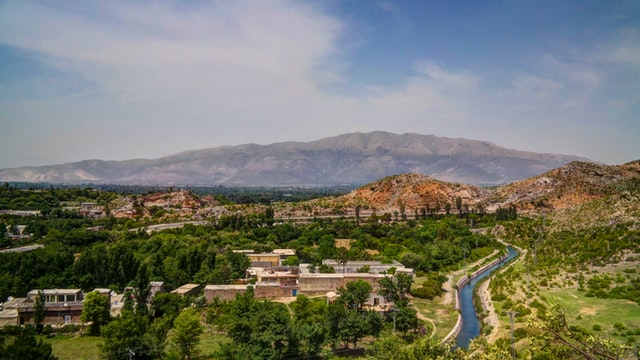 Taxila is an important archaeological site in Punjab containing the ruins of the Gandharan city. Legend has it that Taksha, an ancient Indian king who ruled in a kingdom founded the city of Takshashila. Taxila had been variously a capital for many dynasties, and a centre of Vedic culture and Buddhist learning for centuries. The British archaeologist Sir John Marshall conducted excavations over a period of 20 years in Taxila. Takshashila was an early center of learning dating back to at least the fifth century B.C.E. Some consider Taxila to be an early university. Takshashila is considered a place of religious and historical sanctity by Hindus and Buddhists.

Ancient Buddhist stupa and monastery Taxila built by the Kushans. 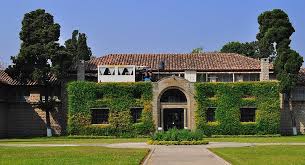 Much of the art and artifacts in Taxila Museum are from the Gandharan era of the 1st and 7th centuries.

Archaeological Museum, Taxila is situated 0.5 Kilometres northeast of Taxila Railway Station and 35 kilometres North West of Islamabad. Its foundation stone was laid in 1918 by Lord Chelmsford, the then Viceroy and Governor-General of British India, while the opening ceremony was performed by Sir Muhammad Habibullah, Member for Education on 5th April, 1928. Over seven thousand rare and preserved objects have been displayed in the Museum. Archaeological excavation at Taxila were carried out between the years 1913 and 1934 by Sir John Marshall, then the Director General of Archaeological Survey of British India. After Independence, Pakistani Archaeologists who unearthed hitherto unknown antiquity of this city. 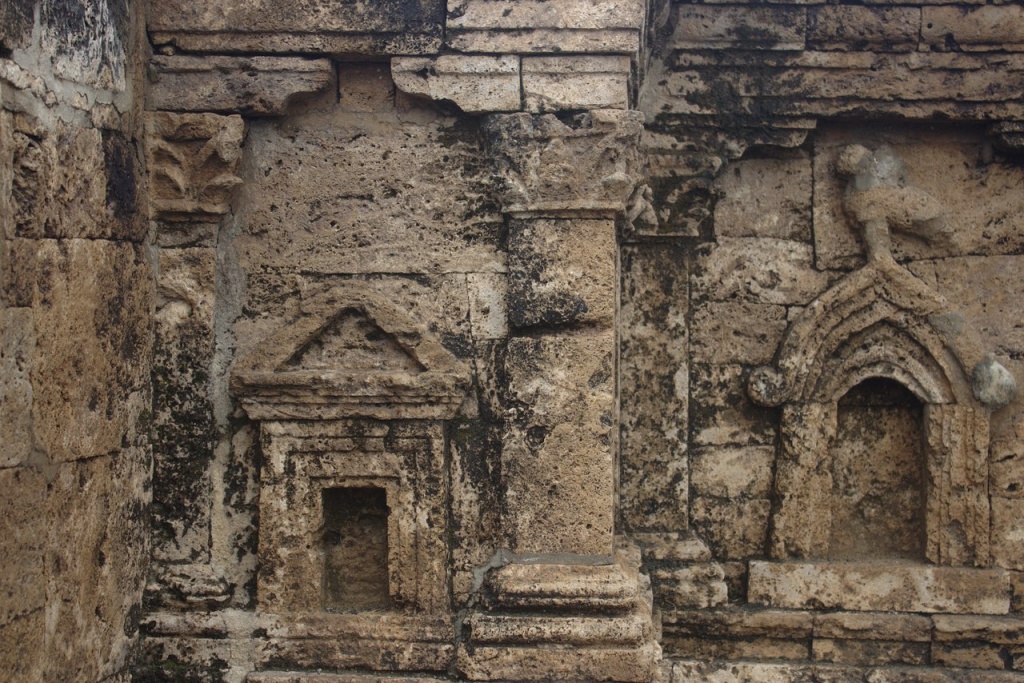 Taxila’s reflect the multicultural nature of the Indo-Greek kingdom 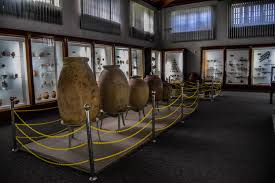 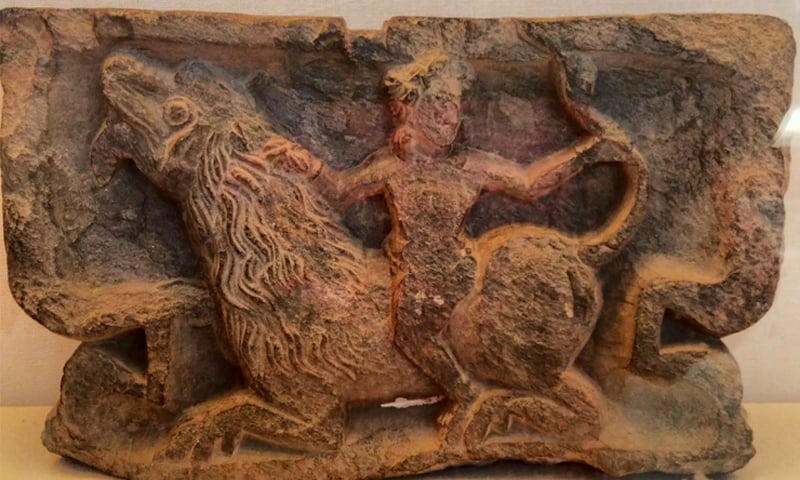 HERITAGE: THE ART OF GANDHARA 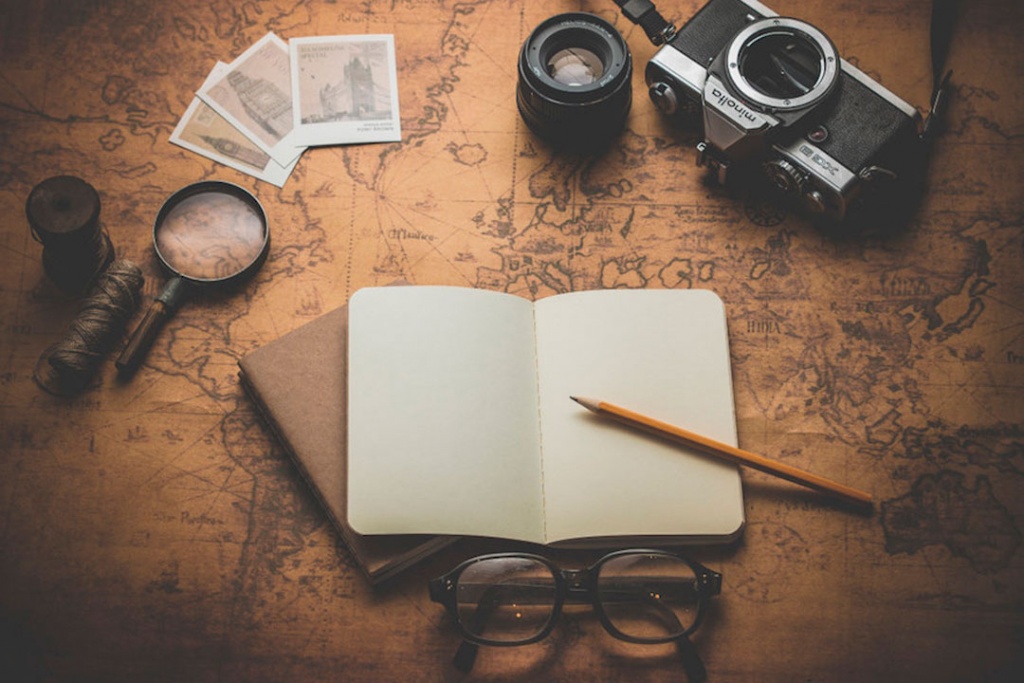 Want to book a tour to Taxila?

Whether you’re off for a study tour, family trip, or an all-inclusive holiday. TDCP will plan your trip simple and affordable. We offer an amazing archaeological day tour to Taxila ancient city from Lahore or Islamabad. The tour involves various archaeological sites including Mohra Murado which was once very famous monk monastery during 3rd to 5th centuries. The tour attractions involve Jaulian Buddhist Monastery, Sirkap and Taxila. Museum. We may add nearby attractions.

What Buddhist Monks Are Saying

“I was impressed by the Pakistani government’s ceaseless efforts to preserve historic sites having a trace of Buddhism,”

Ven. Wonhaeng,
President of Jogye Order of Korean Buddhism
"Gandhara was a binding force between Pakistan and the Buddhist world. The observance of the Vesakh festival for the second time in Pakistan by the Sri Lankan monks would be another milestone in cementing cultural relations between the two friendly countries."

Ven. Nabirittankadawara Gnanaratana
Senior Professor Faculty of Humanities - University of Kelaniya, Sri Lanla
“ The installed ‘Bell of Peace’ sends a message to the world that peace existed on the land of Pakistan” and “This will be a gateway to peace and harmony.” 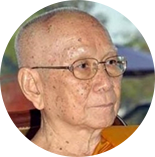 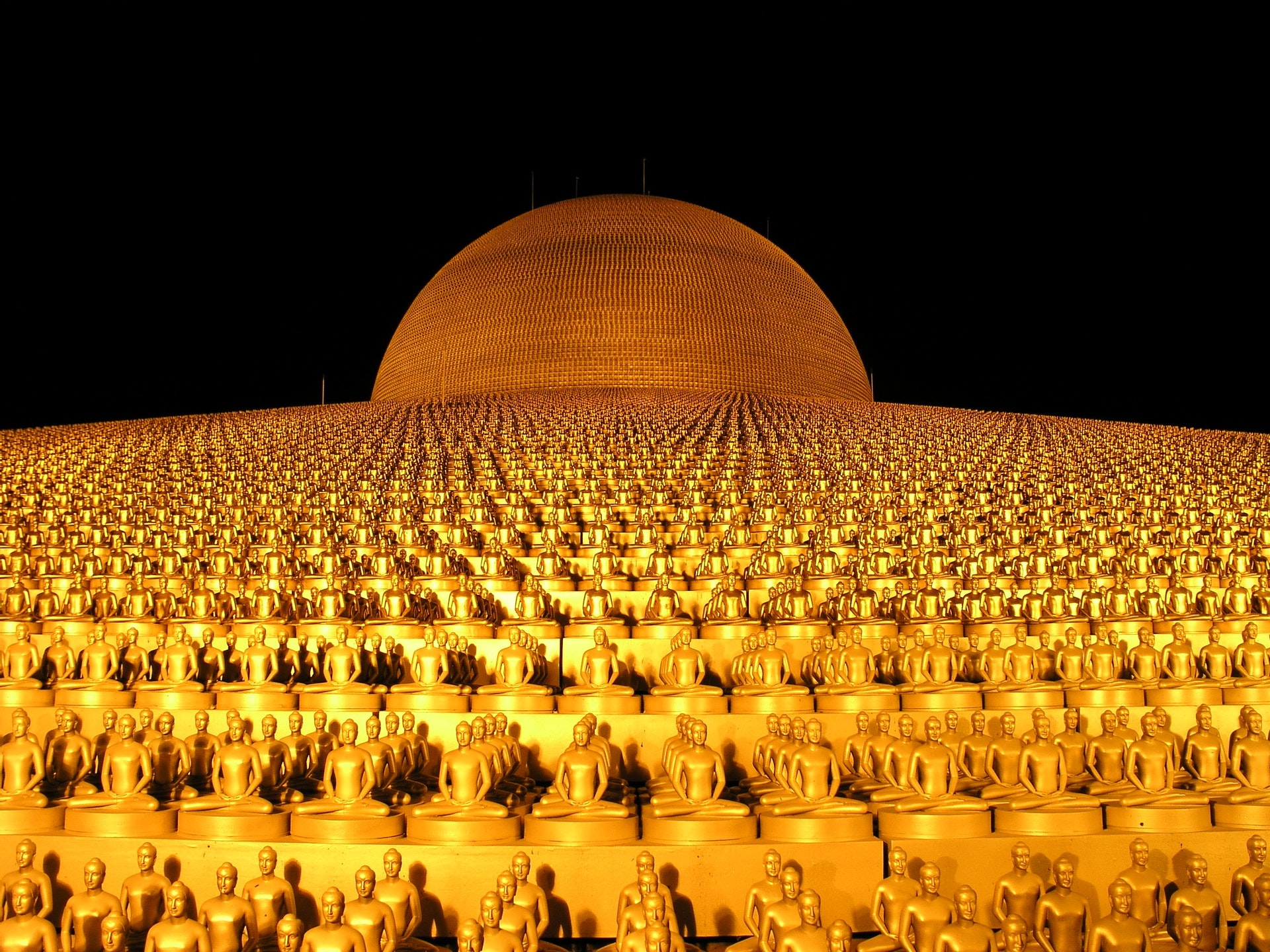 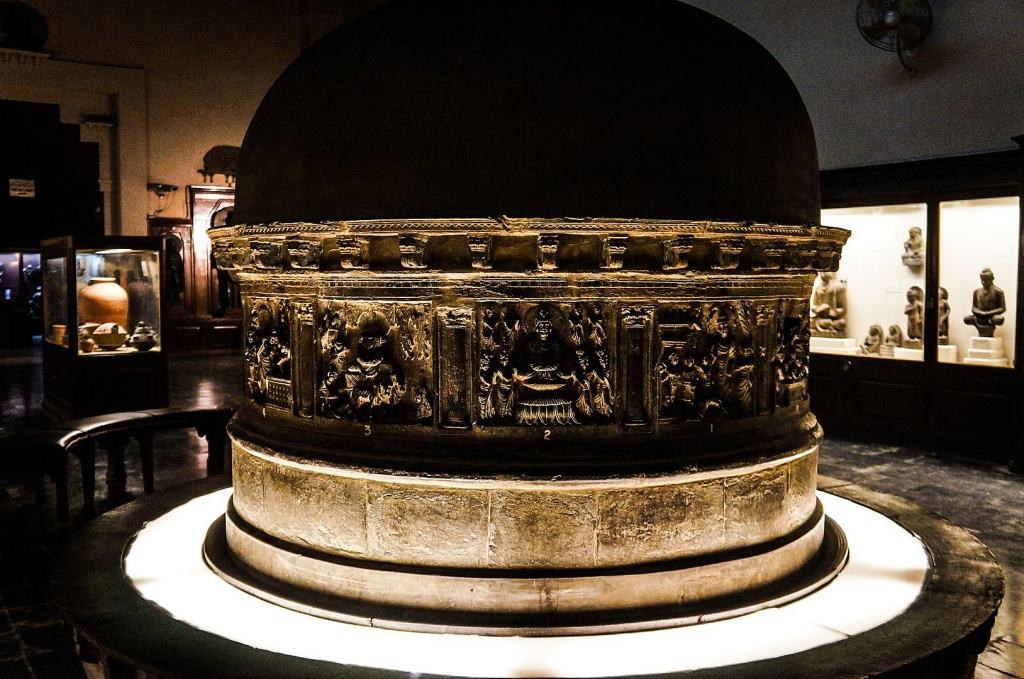 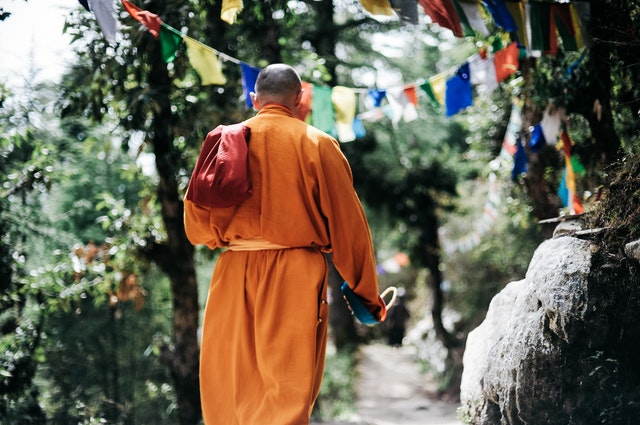